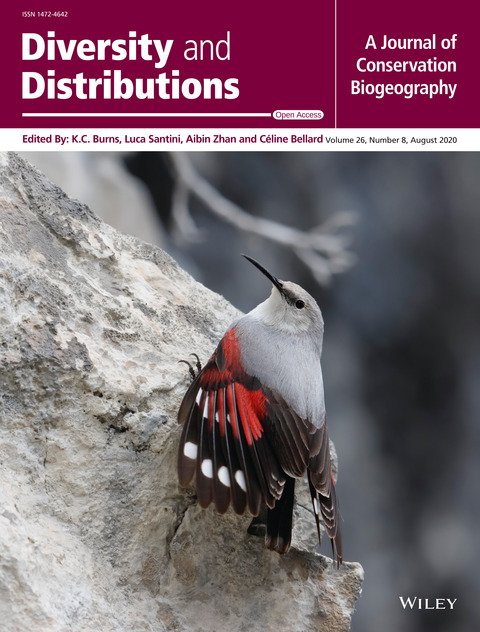 Aim Roads impact wildlife in different ways, among which road mortality has been the most studied. Budgets in conservation biology are usually small, and macroecological approaches have been employed in recent years as the first steps towards guiding management. Carnivores are particularly vulnerable to mortality on roads due to their elevated ecological needs (low population density, often low fecundity and relatively large home ranges). Our aim was to develop a ranking methodology to prioritize specific areas for road‐kill mitigation. Location Continental Italy. Methods We studied 271 occurrences of live polecats (Mustela putorius ) and 212 polecat road‐kill sites. We used the former to generate a species distribution model and the latter to identify the variables that determined the road‐kill risk. Habitat suitability was derived from a spatial distribution model that combined the polecat occurrence data with a set of environmental variables. Prey availability was derived from the combination of suitability maps of 26 prey species. We used generalized linear modelling to identify the set of variables that best explained the occurrence of road‐kills. The variables included in the best performing model were combined to produce the road risk map and to identify the areas with the highest densities of road sections with highest risk. Results Road‐kills were positively associated with the road sections with higher broad‐leaved forest coverage. The number of casualties was found to be higher than expected on the national and provincial roads and lower than expected on the local roads. Main conclusions This approach allowed us to identify the 10 × 10 km cells where mitigation actions to prevent road‐kills should be prioritized. As mitigation actions (wildlife passage construction, fencing) are expensive, measures should be prioritized on the specific high‐risk road sections inside these selected cells, avoiding generalized mitigation plans.

Where will it cross next? Optimal management of road collision risk for otters in Italy

Collisions with vehicles represent the main conflict between infrastructures and wildlife, causing damages to both humans and animals. As to the latter, road mortality is a growing phenomenon and the largest single cause of death for many vertebrates. When focusing on endangered species, the Eurasian otter (Lutra lutra) is among the most vulnerable to road-kills, which represent the predominant cause of deaths recorded in Europe. We propose a large scale spatially-explicit assessment of road-kill risk for the Eurasian otter in Italy as a tool to identify road stretches at high collision risk, thus optimizing the location of mitigation measures. The modelling approach was produced for South Central Italy, hosting the only remnant viable population of otters in Italy. We used a maximum entropy approach including 56 road collision events recorded between 2004 and 2016 through a citizen science initiative, along with seven environmental predictors measured on 1 km grid cells. Four pre-dictors were selected to describe roads characteristics, i.e. density of highways, and of state, regional and local roads. The remaining three variables referred to the quality of otter habitat in the surrounding of the collision sites, i.e. elevation, density of freshwater bodies, and a measure of landscape heterogeneity calculated on land-cover categories. The model achieved a good predictive accuracy (AUC > 0.8; Boyce index > 0.8). The collision probability was mostly affected by elevation, density of state roads, and density of freshwater bodies. Specifically, collision risk was higher in areas at low elevation and medium density of state roads located near rivers and wetlands. In addition, model predictions evidenced that implementing mitigation measures along 10% of road network in the study area could have potentially hampered ca. 50% of otter casualties recorded during the study period.

Fabrizio M., Di Febbraro M., Loy A., 2019. Where will it cross next? Optimal management of road collision risk for otters in Italy. Journal of Environmental Management 251 (December):1-8. 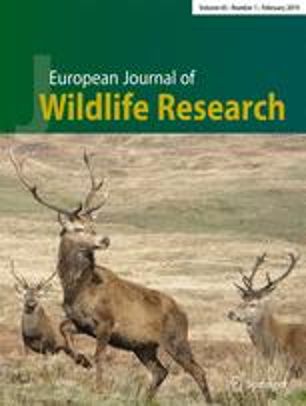 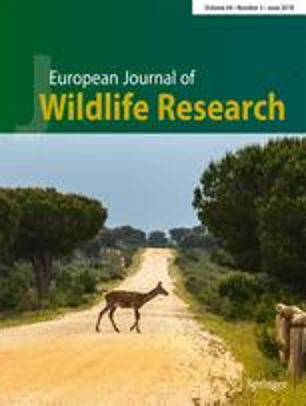 The European Journal of Wildlife Research introduces a new Topical Collection focused on Road Ecology. This Topical Collection aims to be a useful tool for the development of generalized principles and applications concerning wildlife-related aspects of Road Ecology. Submissions exploring new or lesser-known costs and potential benefits for wildlife coexisting with road networks are encouraged. 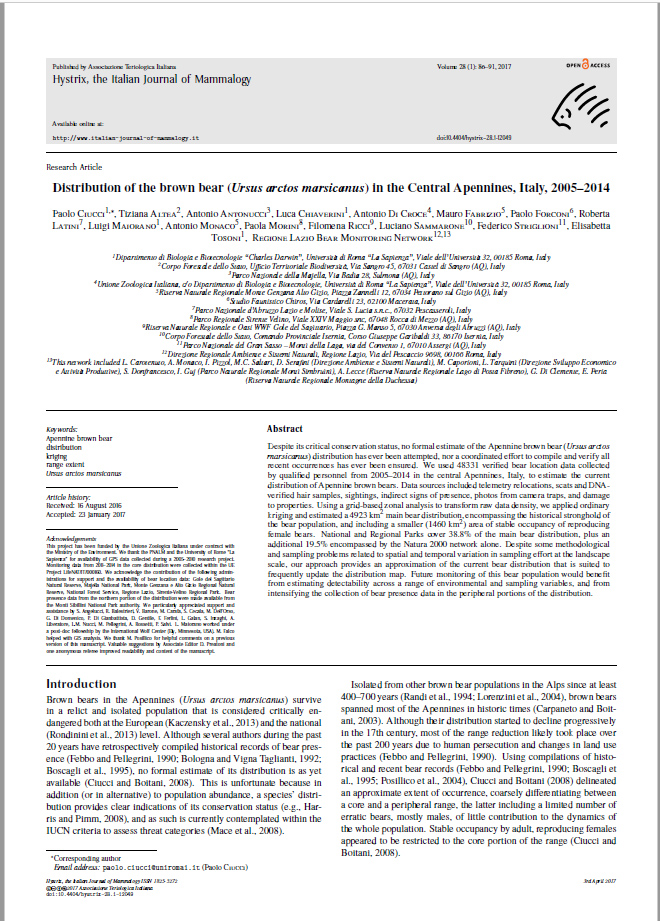 Distribution of the brown bear (Ursus arctos marsicanus) in the Central Apennines, Italy, 2005-2014.

The European Journal of Wildlife Research introduces a new Topical Collection focused on Road Ecology. This Topical Collection aims to be a useful tool for the development of generalized principles and applications concerning wildlife-related aspects of Road Ecology. Submissions exploring new or lesser-known costs and potential benefits for wildlife coexisting with road networks are encouraged.

Hystrix The Italian Journal of mammalogy 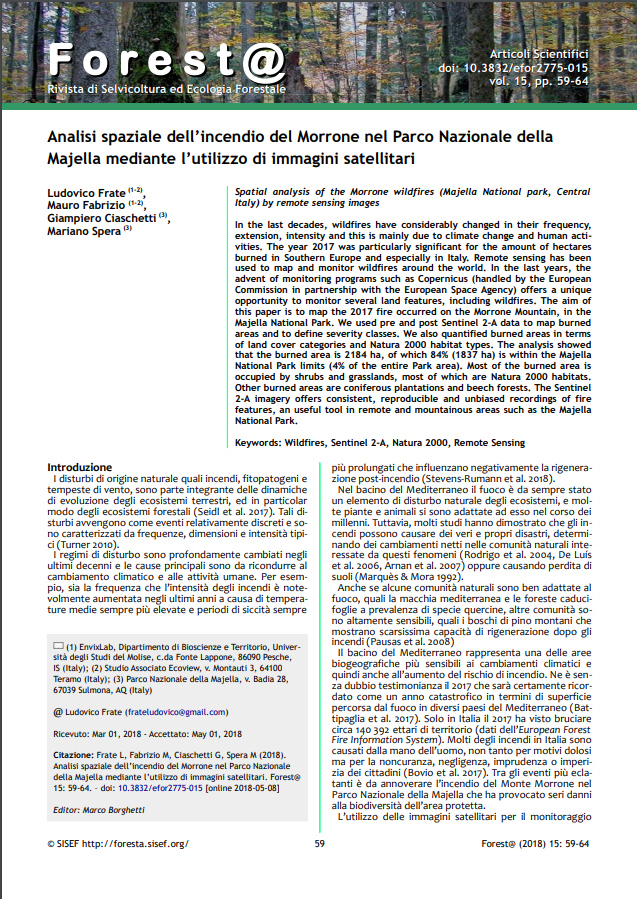 In the last decades, wildfires have considerably changed in their frequency, extension, intensity and this is mainly due to climate change and human activities. The year 2017 was particularly significant for the amount of hectares burned in Southern Europe and especially in Italy. Remote sensing has been used to map and monitor wildfires around the world. In the last years, the advent of monitoring programs such as Copernicus (handled by the European Commission in partnership with the European Space Agency) offers a unique opportunity to monitor several land features, including wildfires. The aim of this paper is to map the 2017 fire occurred on the Morrone Mountain, in the Majella National Park. We used pre and post Sentinel 2-A data to map burned areas and to define severity classes. We also quantified burned areas in terms of land cover categories and Natura 2000 habitat types. The analysis showed that the burned area is 2184 ha, of which 84% (1837 ha) is within the Majella National Park limits (4% of the entire Park area). Most of the burned area is occupied by shrubs and grasslands, most of which are Natura 2000 habitats. Other burned areas are coniferous plantations and beech forests. The Sentinel 2-A imagery offers consistent, reproducible and unbiased recordings of fire features, an useful tool in remote and mountainous areas such as the Majella National Park. 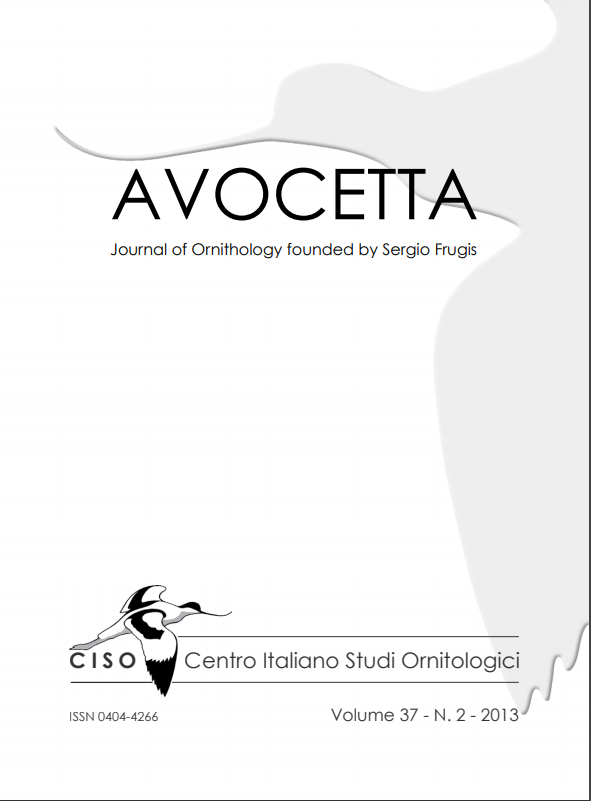